When looking for accessories that seem to be tiptoeing the fine line between art and fashion, there is one piece that is sure to be found: the cameo. This jewelry features miniature reliefs that typically show a profile view of a woman’s face or a mythological scene, and have captured the hearts of many with their high sentimental value and impeccable craftsmanship. The name for the object has origins in Italy where it means “to engrave”; it is also said that the term was derived from the ancient Arabic word “khamea”, translating to “amulet”. Now that we know what the object is, let’s explore its rich history.

A tradition that began at the end of the 15th century, cameos were first widely popularized by Queen Victoria and featured women’s profiles carved in sea shells, which is a practice that is still favored today. Despite this romantic evolution, the decorative jewelry piece has not always been a feminine accessory. In fact, they have been favored by men throughout history and this fondness began nearly 300 years prior to the birth of Christ. In ancient Egypt, carving reliefs into rock were used to record significant events in history as far back as 15,000 B.C. Cameos of this era frequently featured depictions of ethical values or made a statement about faith and loyalty. Since the conception of this genre of jewelry, it has had a variety of uses throughout history. In early Greece and Rome, many carvings featured mythological creates, attractive women, or biblical events. The Hellenistic era saw young women using cameos to express their romantic desires; these pieces commonly depicted a relief of a dancing Eros as an invitation for seduction. The Renaissance brought these motifs to the attention of Pope Paul II and it is said that his love of the piece contributed to his death as his extensive collection of cameos kept his hands and body so cold that he ultimately froze.

In addition to their use as military accessories, they were also collected by women in the Elizabethan period to prove cultural status and serve as a souvenir for their travels (specifically to the newly discovered Pompeii). Even Napoleon became enchanted by the creation; he wore one to his own wedding and even founded a school in Paris dedicated to teaching the art of cameo carving. 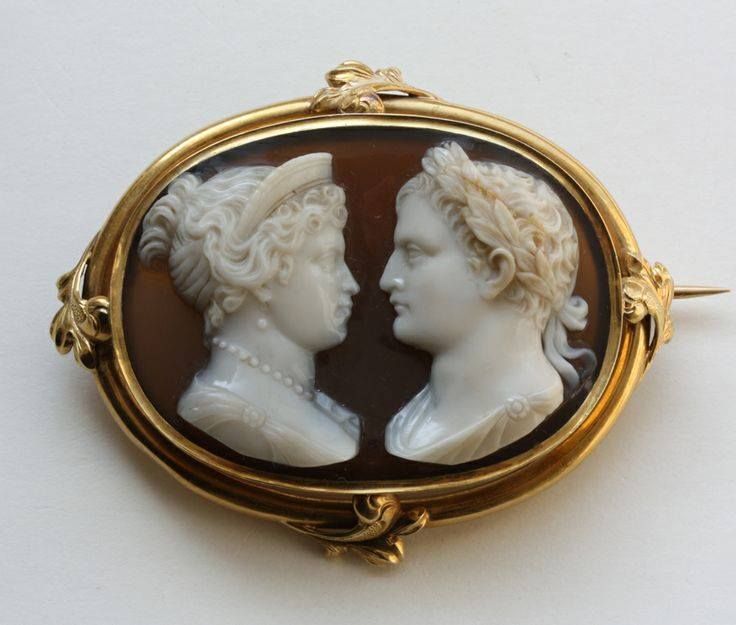 Cameos are made from a variety of materials, but in order to tell if they are authentic and not made of plastic, you can expect them to be carved out of the following:

As the most frequent shell used for cameo carving, this material is low intensity with colors in peach and orange tones.

With a thicker outer wall and dark brown interior, this shell can resemble marble when carved. The cameos in these shells tend to cost more because of their rarity, and they are distinctive in color with a white foreground starkly contrasting the darkness.

Best set in silver, mother of pearl cameos customarily are opaque with a bluish-grey color.

Agate cameos are blue or green in color and have a more modern look, despite the fact that this material has been used to create this piece for centuries.

(Above photo credits to thecameocollection.com)

If these materials aren’t easily recognizable, you can check the authenticity of your piece by observing the cameo’s appearance. Ones made in plastic are typically thicker than shells, so if they are real, they should be slightly transparent. You can also check for cracks as shells are fragile and are susceptible to damage if not cared for properly. Checking the carvings is another easy way to differentiate between plastic and real, raw material as those carved in shell should have fine markings whereas plastic is more smooth. For cameos of all types, check out our collection for brooches, rings, necklaces, earrings and bracelets that are sure to add a romantic touch to any fall look!