Dazzling Dressing Tables: A Brief History of the Vanity

Though the world of luxury furniture is very much alive and well, the type of pieces we see popularized now are worlds away from the specially crafted styles that previously dominated the market. If you are someone with cosmetics, accessories, or perfumes, it is likely that you have some sort of container to hold them all (or so we hope!). But, we ask, have you ever stored them in an ever-so-glamorous vanity?

The dressing table is one piece of furniture that reveals a great deal about the culture in its time; few other items tell us more about leisure pursuits, trends, and changing social customs than this. This is an ever evolving piece and it has held a variety of names including the dressing table, dressing stand, vanity, and toilet table. But, we wonder, where did this fashionable furniture come from and how did it achieve the elegant status is possesses today?

(photo credits to the metmuseum.com)

Of course, the vanity comes from humble beginnings in ancient culture; its earliest ancestor is considered to be ornate boxes that were crafted for holding beauty products in Egypt and Greece. The use of boxes for this storage purpose continued for centuries until the 1600s in Europe, where the early vanity began evolving. The original name of the piece was the toilet table and they were used in the bathroom for hygiene purposes with a wash basin for freshening up. High society in this century and into the next began wanting more delicate designs; they started commissioning specialized furniture pieces that were modeled after shaving tables, poudreuses, and the low boy. Poudreuses hailed from France; they boasted a small tabletop for holding perfume, along with a small amount of drawer storage for makeup. Low boys were more so popular in the U.S. and England and were often custom made. In addition to their decorative elements, they typically offered one or two rows of drawers for storage purposes. 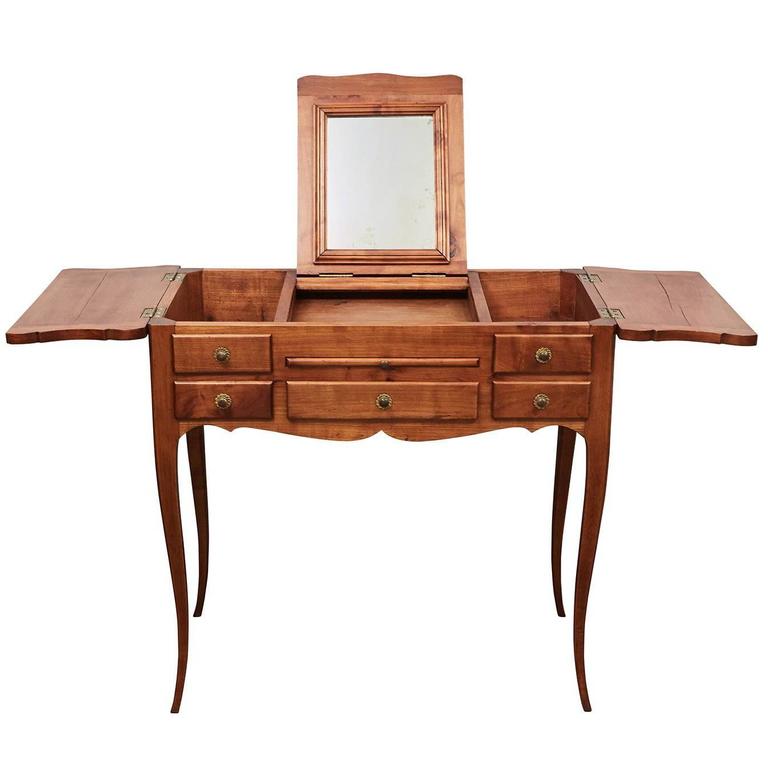 As we headed towards the 19th century, these tables started to become larger with more decorative features. They now included mirrors and an increased number of drawers, making them a more cabinet-style. With their newfound function, they began being included in bedroom furniture collections and were commonly accompanied by a small stool. The variety of styles offered also increased in this century; colonial, Queen Anne, and Chippendale style vanities were elaborate and were often made of oak, walnuts, or mahogany. We saw huge art movement influence on these tables and many revivalist styles including Gothic, Elizabethan, Rococo, and Renaissance.

The early 20th century brought the Art Deco movement alive; this artistic style is synonymous with the 1900s rise of the vanity as luxurious dressing tables became the epitome of prestige. Old Hollywood films of the ‘20s and ‘30s painted a picture of a femme fatale sitting in her Manhattan apartment decorated with an elegant vanity table. Since then, vanity table's luxurious standing still prevails with influencers and couture queens alike creating entire rooms surrounding their vanity space. Do you have a vanity you are looking to fill! Well say goodbye to those empty drawers and hello to our collection for a solution any accessory lover would adore!