Designer Spotlight of the Week: Missoni

Considering our discussion of color and patterns in the fashion world this week, it was only appropriate to spotlight one of the most iconic brands of all time that put colorful knitwear front and center. Missoni, which was established in 1953, is now a global label that has established its high profile image by experimenting with stripes, plaids, patchworks, mosaics, zigzags, and wild patterns intertwined with vibrant color combinations. This Italian fashion house was founded by Ottavio Missoni and his wife Rosita; since the brand’s conception, the Missoni family has become famous for their values and closeness. As their brand developed, Rosita became the house’s business manager while Ottavio used his exception eye for color to be the genius behind their color palettes. Since then, it has been run by three generations of Missonis and is now in the hands of the creators’ daughter, Angela, who has made the brand into what it is today. Now that we know about who created Missoni and when, let’s look more into the dynamic history of one of fashion’s most quintessential labels.

When the brand first was created, it began producing tracksuits for the Italian Olympic team as Ottavio was formerly an athletic sprinter. The pair continued manufacturing athletic wear until they took interest in knitting machines. Soon after, they discovered the Raschel machine; after using a technique known as fiammata, or flames, the machine created a knitted fabric with an intricately weaved zigzag pattern. This 1962 discovery birthed their iconic design as they could only create stripes in simple structures prior to the Raschel.

Their first runway show in 1967 put their unique style on the map and by the 1970s, they were recognized worldwide for their artisanal craftsmanship. They used a variety of materials including wool, cotton, linen, rayon, and silk with over forty colors that made their fun patterns pop. Two of the brand’s biggest fan included Anna Piaggi and Diana Vreeland, and magazines all over the world were pining for Missoni’s hippy-chic designs to grace their pages. The brand began experimenting with chevrons, waves, prints, and scalloping, but their zigzag pattern still held the crown as their most popular style. In 1972, the New York Times even went as far as declaring that Missioni’s knitwear had become an “international status symbol, like Vuitton bags and Gucci shoes”. 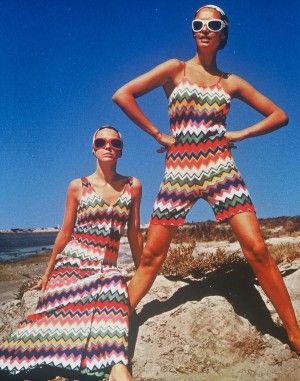 As the ‘70s progressed, Missoni was applying their iconic patterns to everything from accessories to home goods. They officially launched a home label in 1983 and has been ever-expanding since. In addition to accessories and homeware, they have also produced swimwear and fragrances. They have even collaborated with huge brands like Target and Havaianas to make their iconic designs more accessible to a wider market. Buyers were so enthused that their designs could be seen in Target that it crashed the retailer’s website after the release. Missoni aesthetics can be seen out of the home as well as the brand opened a series of themes hotel with their interiors being adorned with colorful zigzags. 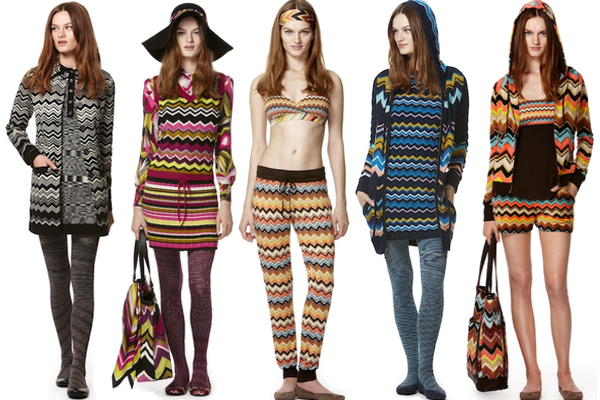 The family run company has Angela at its head, who completely reimaged the company’s image to be sure it reflected her parent’s original values. She has held the position of design director for twenty years and over this time has altered the marketing approach to cater to more urban and youthful clientele. She has done this through a multitude of extensive campaigns, most notably with fashion photographer extraordinaire Mario Testino. Her daughter and brothers are also active in the company; her daughter Margherita serves as her assistant while her brothers, Vittorio and Luca, work in more technical fields of sales and research. The family is careful about partnerships and licensing agreements, but they do have over 20 that extend into women’s wear, men’s wear, children’s fashions, accessories, and home furnishings. They even have made partnerships with automobile manufacturers to create fabrics for car interiors. However you like to interact with the Missoni brand, it is evident that throughout its lifespan, the brand has stayed true to their original values. At the forefront of fashion since its conception, the designs themselves have become iconic and occupy every design medium. If you are looking to sport some Missoni flair of your own, head over to our collection and snag some of our favorites!