When it comes to the evaluation of headwear as an accessory rather than something worn out of necessity, it can truly make or break an outfit. Adding a scarf or hat to compliment a piece is customary, but what about more lavish head ornaments that are typically sported by royalty or those strutting the red carpet? Read on to learn about hair and head ornaments that emulate opulence from the top down!

This eclectic headwear is a more decorative alternative to the hat. Its roots can be traced back the Renaissance where it was customary for Christian women in Europe to sport head coverings. The use of the term came into circulation to describe the evolutionary form of this headpiece towards the end of the 20th century. Presently, it is typically worn at events where hats are customary and is accompanied by formal attire. They are commonly worn by woman as a covering during church services, weddings, or horse racing events. They are seen in great volume at royal events and Princess Beatrice of York wore a piece to Prince William and Catherine Middleton’s wedding that was so unusual, it became an internet sensation! A tiara is a specific type of crown that tends to be bejeweled and ornamental in style. Appropriate for formal occasions of the white tie variety, this headpiece originates in Persia as a status symbol. The use of tiaras in ancient times declined with the rise of Christianity, but they saw a revival in the 18th century when Neoclassicism popularized the accessory for female adornment. Despite the fact that this revival was geared toward royalty, this piece has also been worn by wealthy commoners. The style is popular in the costume jewelry industry where they are worn by women for special occasions including homecomings, proms, quinceaneras, pageants, or weddings.

The hairpin can come in many forms, but its basic function remains the same: to hold one’s hair in place. Whether the piece is elaborate and ornamental or utilitarian like a bobby pin, they are essential in creating different hairstyles. Coming from ancient Egypt and China, they were worn by all genders and were essential to hairstyling. They can also be used to note one's social or marital status. Now, they have a more decorative appearance and can be in the form of a barrette, bobby pin, or classic long straight pin. 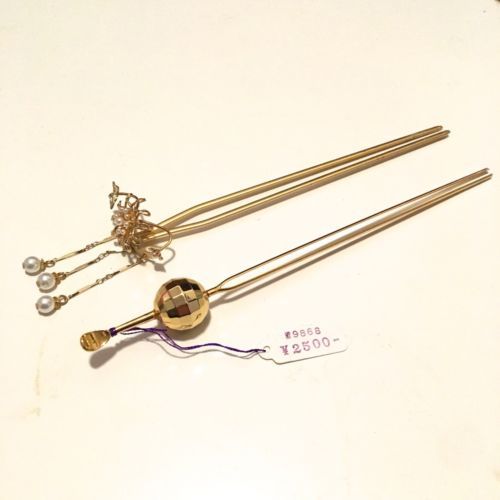 This hair accessory can be considered a variation of the hairpin; it is decorative and functional, with its main purpose being to hold a hat to the head. It was invented in Britain in the early 1800s and after its conception, the demand grew so great that a machine was created so it could be mass produced. In the late 1800s, bonnets became widely more circulated than hats, forcing hairpins into the closets of millions. They continued growing in popularity until the early 1900s until women began using them for self-defense purposes. They then began being regulated and their length decreased in order to deter wearers from using them as weapons. As the most traditional of headpieces on this list, the crown is a symbolic headwear typically won by royals. They represent power, victory, honor, glory, and legitimacy, and are often emblematic of the monarchy. These pieces can feature natural motifs, and they often are adorned with an assortment of expensive jewels. There are a variety of crown types and they can be used in coronations, at state occasions, or during weddings. You can even find their style being copied for novelty events (think Burger King's kid crowns!)

Has Megan Markel and Harry's wedding got you feeling headpiece crazed? We can sate your desire for this royal glamour from the top down! Take a look at our collection to find headpieces for every occasion!